Zheng Wei, Vice Minister of the Legal Department of CCPIT, said in his speech that in February this year, the European Commission put forward the European Green Trade Work plan, and in March this year, the European Parliament passed a resolution requiring the Commission to implement border carbon adjustment by 2023 as planned. On 14 July this year, the Commission adopted a package of legislative proposals known as Fit for 55, making its European Green Trade scheme a reality. The EU aims to achieve a 55% reduction in carbon emissions by 2030 and become the first to achieve carbon neutrality by 2050 through legislation that adjusts its laws, regulations and policies on climate, energy, transport and taxation. The EU’s climate targets and related systems have brought risks and opportunities to Chinese enterprises. On the one hand, China has become the EU’s largest trading partner in 2020, and if the EU’s carbon tariffs are implemented, Chinese enterprises will be greatly affected. To a certain extent, China’s export costs will increase and trade competitiveness will decline. Chinese enterprises should fully understand the problems brought by carbon tariffs and do a good job of risk prevention. On the other hand, the EU’s analysis on climate change has brought new topics to Chinese enterprises, especially those in the field of new energy.

Sara Marchetta, a lawyer at Camindi Law Firm in Italy, explained investors’ concerns about ESG by analyzing climate change and climate risk from a lawyer’s perspective and gave some suggestions on how to reduce the carbon footprint to get investors’ attention. She also analyzed the risks faced by enterprises in the field of climate change, such as climate accountability, transparency and information exchange, and introduced the EU’s current laws, regulations and policies in the field of climate change, the objectives of member states, the EU’s green trade and various regulations on enterprise regulation. 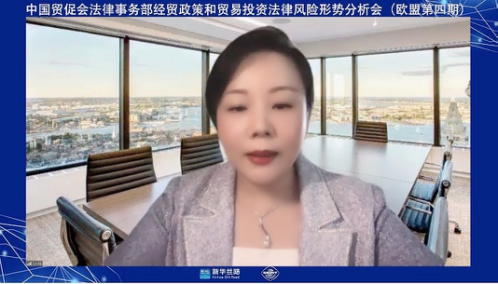 Ms. Linda Yang, Founding Partner of Yingke International, delivered a keynote speech titled “The Impact of EU Carbon Tariff Policy on the Development Trend of China-EU Trade”. She introduced the background and content of the EU carbon tariff Law, namely “The Regulation on the Establishment of a Carbon Border Regulation System. The regulation reflects the EU’s green Trade scheme, which was established in 2019, through legislation that adjusts laws, regulations and policies in areas such as climate, energy, transport and taxation. The EU aims to reduce carbon emissions by 55% by 2030 and become carbon neutral by 2050. Lawyer Lin Yang explained the EU border carbon adjustment in the “Fit for 55” law, which requires EU importers to refer to the carbon emission price of the EU emissions trading system and pay for the corresponding carbon trading permits when importing certain products.

The content of this analysis meeting is substantial and professional, attracting many viewers. As the overseas legal consultant of CCPIT, Yingke will continue to cooperate with CCPIT to bring high-level conferences and lectures, and provide professional and efficient legal services to facilitate cross-border cooperation and investment of Chinese enterprises.

On the morning of June 23, under the witness of China Chamber of Commerce of Import and Export Machinery and Electronic Products (CCCME) President Zhang Yujing and other guests, Zheng Chao, vice president of CCCME and chairman of the expert committee, signed a strategic cooperation agreement with Mei Xiangrong, founding partner, director of the global […]